What’s On Magazine February 2018 is out now with exclusive pictures from the London opening of Cirque du Soleil’s new show OVO which is running at The Royal Albert Hall until 4th March 2018. 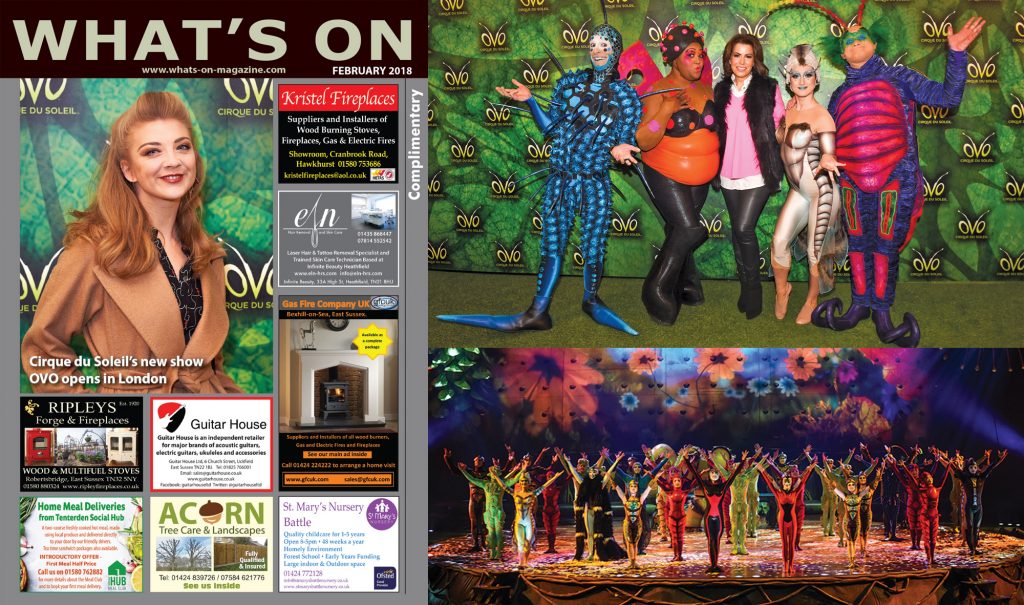 Our cover celebrity is Game of Thrones star Natalie Dormer who joined other celebrities on the press night performance.
Pick up a copy at one of our many local distribution points including major supermarkets.
You will also find a comprehensive list of forthcoming events for February in your area as well as many London exhibitions. 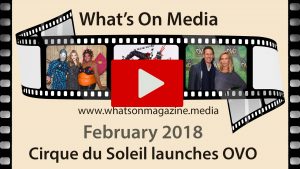 Celebrities including Game of Thrones star Natalie Dormer helped launched Cirque du Soleil’s latest show OVO at the iconic Royal Albert Hall, London. The show has never been seen before in the UK and is filled with a colourful carnival of crazy crickets, amazing ants and flexible fleas, OVO uncovers the natural world at our feet. Rush headlong into an ecosystem teeming with life, where insects work, eat, crawl, flutter, play, fight and love.
Crawling with fun, OVO is a non-stop riot of energy and movement featuring many of Cirque du Soleil’s mind-blowing signature acts including a stunning 14m high flying trapeze act – the biggest of its kind! OVO will keep the whole family buzzing!

OVO is a headlong rush into a colorful ecosystem teeming with life, where insects work, eat, crawl, flutter, play, fight and look for love in a non-stop riot of energy and movement. The insects’ home is a world of biodiversity and beauty filled with noisy action and moments of quiet emotion.
When a mysterious egg appears in their midst, the insects are awestruck and intensely curious about this iconic object that represents the enigma and cycles of their lives.
It’s love at first sight when a gawky, quirky insect arrives in this bustling community and a fabulous ladybug catches his eye—and the feeling is mutual.
OVO is overflowing with contrasts. The hidden, secret world at our feet is revealed as tender and torrid, noisy and quiet, peaceful and chaotic. And as the sun rises on a bright new day the vibrant cycle of insect life begins anew.
The name OVO means “egg” in Portuguese. This timeless symbol of the life cycle and birth of numerous insects represents the underlying thread of the show. Graphically, OVO hides an insect in its name: The two “Os” represent the eyes while the letter “V” forms the nose.

• OVO is the 25th Cirque du Soleil live production created on the company’s 25th anniversary.
• OVO first premiered in Montréal in April 2009
and has visited more than 30 cities in 6 different countries as a Big Top show before transforming in an arena show in 2016.
• OVO celebrated its 2000th show in February 2015 in Fukuoka, Japan.
• The crew of OVO is an international one, representing 17 nationalities: Australia, Belarus, Belgum, Brazil, Canada, Chile, China, Denmark, France, Moldova, Mongolia, Russia, Spain, Taiwan, Ukraine, United Kingdom and United States.
• Although you will generally hear French and English spoken on-site, many other languages are spoken: Chinese, Portuguese, Russian and more.

Complicity with the world of insects
Liz Vandal, the costume designer for OVO has a special affinity for the world of the insects. “I’ve always had passion for them,” she says. “When I was just a kid I put rocks down around the yard near the fruit trees and I lifted them regularly to watch the insects who had taken up residence underneath them. I petted caterpillars and let butterflies into the house. So when I learned that OVO was inspired by insects, I immediately knew that I was in a perfect position to pay tribute to this majestic world with my costumes.”